Opportunities to Train with Japanese Instructors

Through links with JKS Scotland, Borders Shotokan’s instructors and students have access to training courses with a range of internationally-renowned Japanese karate instructors including training with Kagawa Sensei, the Chief Instructor of JKS (Japan Karate Shoto Federation).

Thanks to JKS Scotland and various other international JKS associations, Borders Shotokan has been able to engage in extensive online training with these instructors over the last year.   There have been more than 60 courses alongside international seminars.

In addition, Borders Shotokan instructors and students have also been able to take numerous opportunities to train online with Kasuya Sensei – the Chief Instructors of WSKF. 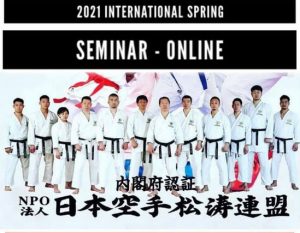